Turkey production is a profitable agribusiness that is now attracting the interest of farmers, agropreneurs and investors due to success stories of some turkey raisers. Government effort at curtailing or stopping importation of frozen foods has further boosted local production in Nigeria. Turkey is a fast growing bird like broiler chicken hence they are often raised for meat rather than egg production. The demand for turkey meat is not only in December but all year round due to its meat quality, quantity and flavourful taste. Turkey farming is rated number one (1) agribusiness opportunities for livestock sector. The turkey meat is a premium meat being sought after in hotels, big events/occasions, restaurants/eateries and big cities. The risk involved in turkey farming is less compared to broiler farming. Turkey management is not totally different from other poultry birds’ management.  A matured local turkey can be sold for at least N10,000. Four to six weeks poults can be sold for N2,000 per poults. A foreign turkey collected by July can be sold by December for N15,000 per one. If you now keep up to 500 poults, you will be making close to N7,500,000 in 6 months.
To start with, it is important to determine the target market (potential customers) for your turkey products (Poults, Live Turkey, Processed Turkey or Grilled Turkey) which is part of good business planning. Note that production is not the first thing in agribusiness but a viable business plan which can then translate into viable agribusiness. Turkey needs good housing with proper ventilation like chicken birds. Deep litter system is mostly used to raise commercial turkey; semi-intensive system which allows grazing is also good for turkey production but should be in a fenced environment. It has been shown that turkey that is allowed to graze or fed with pasture supplement produce more tasty meat. It is important to note that turkey require more protein feed than any other poultry birds in early weeks (from 1-6 weeks). Turkey vaccination programme should be followed accordingly, note that Fowl pox vaccine is very important for turkey.
Basically, there are three major breeds of turkey and they are; Local Turkey, Foreign Turkey and Hybrid Turkey (Crossbreed). They are all good for commercial production however; the foreign turkey has the greatest ability to convert less feed to more meat in short time (short maturity period) that does not mean they don’t consume much feed in fact they are very voracious. Local turkeys are more hardy than foreign turkeys and even good grazer, in fact they like water leaf and pawpaw. Despite the fact that turkey share same management characteristics with chicken, they require proper care especially during brooding because of their fragility and early days sight problem. Male turkey is called Tom, female turkey is Hen while day old turkey is called Poult. Breed selection, source, vaccination and good feeding are critical to turkey business success. 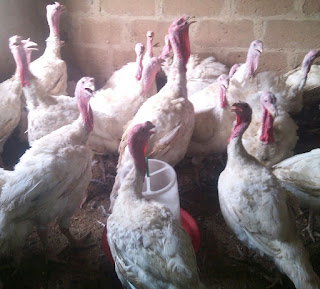 If you want to get less mortality in turkey brooding, serve them milk the first day, this has not gone through empirical study but it works for me. Add some chicks that will allow them eat fast” – Ameachi John, a poultry farmer in Port-harcourt.

I serve them Glucose D by mixing it with 3 litres of water and provides a very strong lightening. I also mix them with chicks

I always raise turkey with cockerel because they are very smart, they will be the one to guide the cockerel. If you are raising local turkey, five (5) hens with one (1) tom is a complete family for multiplication.
Never have two (2) tom with hen, it’s going to be a serious fight between the toms. If well handled, at maturity within one year the five (5) hens can become 100 or more. One hen can lay up to 15 eggs and hatch it. Collect the poults and raise them, then isolate the mother and feed her very well, after four (4) weeks introduce her to male again and she starts off again.

If you are thinking of setting up turkey farm, the right time is now and do explore more.
Leave your comment or inquiry below!!!!