UK Government revealed that Robots Farmers (Farmbots) will soon replace Real Farmers (Human being) in the field and this will promotes work efficiencies and definitely put an end to back-breaking tasks on the Farms. The farmbots developed in UK are capable of performing complex tasks that has not been possible with large-scale agricultural machinery of the past. For instance, a “lettuce bot” is capable of hoeing away ground weeds from around the base of plants. A “wine bot” trundles through vineyards pruning vines. Other bots are under development to remotely check crops for their growth, moisture and signs of disease. What a technology! 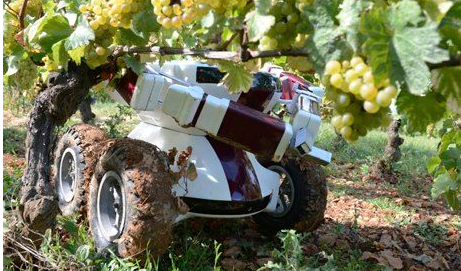 FarmbotsDuring the Oxford Farming Conference in UK, the secretary of state for the Environment, Food and Rural affairs, Owen Paterson, said he wanted Farmers and food producers to have access to the widest possible range of technologies, from new applications of robotics and sensor technology to new LED lighting in greenhouses and cancer-fighting broccoli. According to the guardian.com, the UK Government has set out for the first time an “Agri-tech” strategy, with £160m in public funding. Of this cash, about £70m will go to commercializing new Agricultural technologies – including robots, and £90m will be spent on setting up centers for Agricultural innovation that will seek to develop Farm technology for export, with the help of a new unit within UK Trade and Investment. There will even be a new “Agri-tech business ambassador”, Paterson boasted, charged with driving forward exports of new technologies. It is not just on the ground that technology promises to transform farming. Unmanned air vehicles, or drones, are also coming into play on farms. In South America, with its vast ranches, drones are being used for the surveillance of widely dispersed herds and crop monitoring, and in Japan smaller models are programmed to spray pesticide on crops. In the US, there are experiments under way to use drones for surveillance and perhaps even herding.

The president of National Farmers Union, Peter Kendall, in UK said technology had been key to raising Farm productivity, and this would continue with more “futuristic” appliances such as robots. He pinpointed that automated “robotic” milking machines are becoming increasingly common on large dairy farms. These can milk many cows at a time, sometimes on a revolving platform that lifts the cows to the milking station. Some research suggests this could be better for the cows and improve yield. Arable and vegetable farmers have also made great use of GPS for mapping their crops, he added, and monitoring yield, weed incidence and other vital data, leading to “real rewards”.

While the prospect of replacing seasonal workers with robots may be attractive for farm bosses looking to consolidate into bigger units, farm workers may be less keen. Hockridge said the Government and Farmers should concentrate on the better use of existing technologies: He further said that, Food and Farming, is biggest manufacturing industry and that priority should be creating more and good quality meaningful jobs. Organic farms provide almost 50% more jobs per hectare and over 30% more jobs than non-organic farms.

“Even enthusiasts for such technology acknowledge that the advanced robots now being drawn up will take years and probably decades to reach the commercial stage.

Prof Simon Blackmore, head of engineering at Harper Adams University, told the Oxford conference on Wednesday that his vision was for “farming with robots in 2050”, by which time he believes this should be practical.

Some may never catch on. Perhaps the oddest robot yet under development – and most unsettling for anyone attached to traditional farming practices – is the development of a robot for herding livestock. The bot wheels around pastures on remote control, drawing stragglers back to the herd, though without actually having to nip at their heels. Presumably the dogbot dreams of electric sheep.