A group of Scientists from France, Cameroon and Switzerland has discovered that the root of African Plant- the Pincushion tree (Nauclea latifolia) produce large quantities of Pain-killing substances. An even more surprising finding from the analysis was that the molecule is identical to Tramadol, a pharmaceutical ingredient manufactured synthetically and used as analgesic all over the world. According to the scientists, this is the first time that a synthetic medicine made by the pharmaceutical industry has been found in such high concentrations in a natural source.
Nauclea latifolia is a small shrub found all over sub-Saharan Africa and used in traditional medicine, especially in Cameroon, to treat epilepsy, malaria and fever.
The Scientists collected extracts from Nauclea latifolia, separated compounds into groups on the basis of their mass and chemical properties, and then tested each group in mice for its ability to relieve pain. The team found an oily yellow compound in the most potent group and determined its chemical structure to be that of Tramadol, which has been sold as a synthetic analgesic since the 1970s. The compound was detected only in the plant’s roots — the same parts used in traditional remedies to treat pain. The researchers believe that this is the first time a widely prescribed synthetic drug has been found in a plant at clinically relevant concentrations. 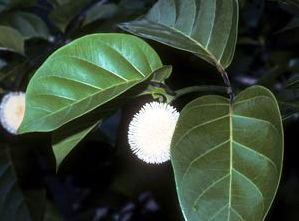 To confirm their findings, the researchers used different methods to test the authenticity of the natural origin. “All findings concur and confirm the existence of Tramadol in the root bark of Nauclea latifolia. In contrast, no trace of the molecule could be detected in the upper parts of the plant (leaves, branches)”, explained Michel De Waard, a french scientist, who is also director of research at INSERM. In order to exclude any unintentional contamination of the samples with synthetic tramadol, the scientists took samples from inside the same roots, and could also confirm that the molecule existed there.

In addition to the existence of this – probably unprecedented – discovery of a naturally occurring painkiller that could replace a synthetically produced medicine, the discovery also opens up access to cheap treatment based on traditional medicine for the local population in sub-Saharan Africa where the pincushion tree is indigenous. The next step planned by the scientists is to examine the some ten different varieties of Nauclea latifolia to identify which varieties also contain Tramadol.
Drop your comment below!!!