Skip to content
The need to practice organic & green agriculture as well as IPM which maintain and increase farm productivity and profitability on a sustainable basis; eliminate or reduce negative impact on environment and rebuild and/or preserve ecological resources led to the discovery of neem.
Neem (Azadirachta indica) is a wonder tree found in and adapted to warm tropical regions of the world. Mature neem tree is recognized with a rough and feebly fissured trunk as well as serrated leaflets. Neem has been described as “Heal all”, “Divine Tree”, “Village Pharmacy” and even “Nature’s drugstore”. Common name for Neem by geographical location are as follows, Dogonyaro (Nigeria), Margosa/Indian Lilac Tree/Margosa/(Europe), Vepa/Vembu/Yeppa/Veppam/Nimbay (India), Kohunmba (Sri Lanka), Thinbaw (Myanmar), Aza darakbul hind (Arabic, Middle east) etc.

According to Rawat, The neem tree was considered a gift of God and the panacea for all diseases. In an old Indian proverb it was said, The land where the neem tree abound, Can death, disease therein be found? 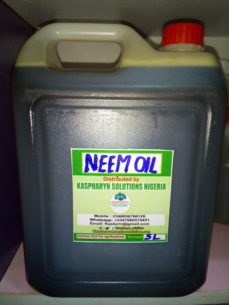 Both neem leaves and fruits (seeds) have been used for agricultural, veterinary, cosmetic and pharmaceutical purposes. The active ingredient in neem is called Azadirachtin. Azadirachtin is contained in seeds in larger proportion than the leaves hence the seeds is the most useful part of neem. Neem is almost non-toxic to mammals and is biodegradable. Neem seeds contain oil with embedded Azadirachtin that can be obtained through Mechanical cold-press or Solvent Extraction Method. Mechanical cold-press method is considered an organic method of extraction. When oil is pressed out, what is left over is Neem Cake, when neem cake is ground, it becomes Neem cake powder.

Neem cake acts as both fertilizer and pesticide. The cake contains high level of amino-acids (protein) and essential minerals.

Neem cake not only provides nutrition to the plant, but controls soil-borne pests, particularly nematodes; it also acts as a nitrification inhibitor, helps respiratory activity, increases the population of earthworms and produces organic acids, which help in removing the alkalinity of the soil. When a nitrogenous fertilizer is applied to the soil, about half of the nitrogen escapes into the air while some leaches into the soil thus mixing or coating neem cake with nitrogenous fertilizer e.g. urea, prevents nitrogen loss while slowly releasing the nitrogen for plant uptake. This brings about fertilizer use efficiency and higher profitability for farmers.

3 thoughts on “EXPLORING THE POTENTIALS OF NEEM”